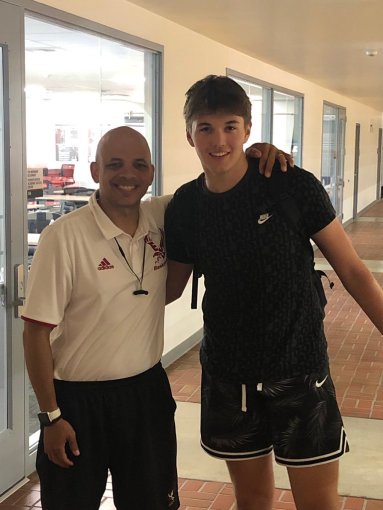 He’s just a sophomore in high school but 2022 forward Tyler Linhardt has already made an impression on college coaches.

Standing at 6-6, Linhardt has inside-out skills that makes him a valuable asset for many programs, including Oregon State, where he recently took an unofficial visit.

“We just toured the place,” he explained. “Coach [Wayne] Tinkle showed me around and I played in runs with all of the current Oregon State players.”

Being just a sophomore, Lindhardt has to wait until next June to have a phone conversation or send a quick text to a college coach. Despite that, they’ve still been able to follow his progress and has kept in touch with his camp, which lets him know to keep working.

“It feels good because I’ve definitely put the work in and it’s showing,” he said. “This early interest and being recruited is very nice, but there is still a lot of work to be done.”

Lindhardt stars at King’s high school in Washington, where he averaged 17.2 points, 5.8 rebounds and 2.1 assist per game. He did just about everything for his high school and it translated into the summer, where he started to pick up offers.

“[Coaches like] my versatility,” he said. “I’m tall and can act as a big guard, as well as, attack the paint and hit shots–rebounding is also a big one they like.”